Book Review: Economics in One Lesson by Henry Hazlitt 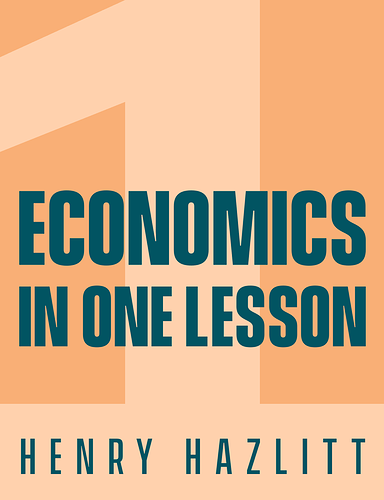 Economics is hunted by more fallacies than any other study known to man. This is no accident. The inherent difficulties of the subject would be great enough in any case, but they are multiplied a thousandfold by a factor that is insignificant in, say, physics, mathematics or medicine—the special pleading of selfish interests.

— Henry Hazlitt, Economics in One Lesson

The subhead for Henry Hazlitt’s Economics in One Lesson is: The Shortest & Surest Way to Understand Basic Economics. After reading the book I am certain that statement is true. The book is short, yet dense. Incredibly dense. It’s an economics version of On Writing Well.

Part I: The Lesson

Part one of the book is titled The Lesson, which can be summed up here.

Hazlitt argues that nearly all economic fallacies stem from focusing on specific groups over short periods of time.

What’s so surprising is that the first version of this book was published in 1946. Heck the latest version is from 1978. However, the advice seem so apt for today’s economic environment. In The Lesson he warns that we are already seeing the long-run consequences of bad economic policy of the recent and distant past. Some bad policies may not be apparent for months, years or decades, but they’ll be visible in time.

This review is already longer than I intended. However, I think that the titles of each chapter within part two might provide some insight into how The Lesson is applied. In almost every scenario, policy resources from one group and gives it to another.

Part III: The Lesson After 30 Years

This is the 1978 addendum to the book. Where Hazlitt confirms that policies based on economic fallacies have had predictable outcomes. In particular, he cites his disdain for the United State’s use of inflation to pay for government programs.

Here he admits that the problems ahead of us are not economic, but political. Most economists agree on what needs to be done. It is our policy makers that must move.

Government’s main economic function is to encourage and preserve a free market. When Alexander the Great visited the philosopher Diogenes and asked whether he could do anything for him, Diogenes is said to have replied: “Yes, stand a little less between me and the sun.” It is what every citizen is entitled to ask of his government.

The 1978 addendum to Economics in One lesson was written about 30 years after the book was published. That addendum is about 40 years old. I find it incredibly striking how relevant the book is after more than 70 years in print.

Economics in One Lesson is short, dense and accurate. It’s at the top of my economics book list and near the top of my all-time-favorites list.

There are so many great quotes in this book. Some of these appeared in the above sections, but I’m going to add a few more here.

There are men regarded today as brilliant economists, who deprecate saving and recommend squandering on a national scale as the way of economic salvation; and when anyone points to what the consequences of these policies will be in the long run, they reply flippantly, as might the prodigal son of a warning father: ‘In the long run we are all dead.’ And such shallow wisecracks pass as devastating epigrams and the ripest wisdom. But the tragedy is that, on the contrary, we are already suffering the long-run consequences of the policies of the remote or recent past. Today is already the tomorrow which the bad economist yesterday urged us to ignore.

But need is not demand. Effective economic demand requires not merely need, but corresponding purchasing power.

Everything we get, outside of the free gifts of nature, must in some way be paid for.

All government expenditures must eventually be paid out of the proceeds of taxation; that inflation itself is merely a form, and a particularly vicious form, of taxation.

…for every public job created by the bridge project, a private job has been destroyed somewhere else.

There is a strange idea abroad, held by all monetary cranks, that credit is something a banker gives to a man. Credit, on the contrary is something a man already has. He has it because he has marketable assets of greater cash value than the loan for which he is asking. Or because his character and past record have earned it. He brings it to the bank with him.

Now we cannot hold the price of any commodity below its market level without in time bringing about two consequences. The first is to increase the demand for that commodity. Because the commodity is cheaper, people are both tempted to buy, and can afford to buy, more of it. The second consequence is to reduce the supply of that commodity. Because people buy more, the accumulated supply is more quickly taken from the shelves of merchants. But in addition to this, production of that commodity is discouraged. Profit margins are reduced or wiped out. The marginal producers are driven out of business.
d to do.”

Profits, in short, resulting from the relationships of costs to prices, not only tell us which goods it is most economical to make, but which are the most economical ways to make them. These questions must be answered by a socialist system no less than by a capitalist one; they must be answered by any conceivable economic system; and for the overwhelming bulk of the commodities and services that are produced, the answers supplied by profit and loss under competitive free enterprise are incomparably superior to those that could be obtained by any other method.”

The forces of self-interest…for good or evil, are more persistently powerful than those of altruism…”

I decided to pick up Matt Ridley’s The Rational Optimist after seeing it appear repeatedly in Hacker News threads. I would recommend The Rational Optimist to everyone. However, I would strongly recommend it to anyone who has anxiety about the state of the world—be it overpopulation, the environment, politics or capitalism. https://www.amazon.com/Rational-Optimist-Prosperity-Evolves-P-s/dp/0061452068 There is so much nonsense in the media about why things are terrible today and that tomorrow …