I’m doing some research on Wi-Fi routers. I currently have Google Fiber, which has been great. When I move I will have gigabit speed through Comcast Xfinity, but don’t want to pay $14 bucks a month to lease their hardware—especially when they allow others to connect to your network. So here. I am researching Wi-Fi routers. 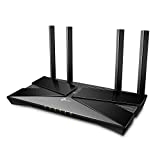 This is The Wirecutter’s top pick for Wi-Fi routers and my gut instinct was that this was the router. However, I’ve read several comments about how the AX50 has weak and unreliable 2.4Ghz connection. Some newer devices have a 5Ghz connection, but many such as the Google Nest Protect only work on a 2.4Ghz connection. One commenter said that he had been through 3 of these routers and they all had the same issue. Perhaps the shortcomings with the 2.4Ghz band is a design flaw?

Another potential concern is that TP-Link may be pushing a subscription model for specific features in their hardware. I am pretty skeptical of that. I don’t want the router to stop working in the future unless I pay a monthly fee. 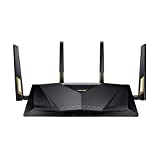 The RT-AX88U is The Wirecutter’s upgrade pick and seems like an outrageously capable router. It performed near the top of all of the tests—I am just not sure about the price. It costs about twice what I was expecting to spend on a router. Then again I am planning to get gigabit speeds and this would provide some level of future proofing.

Perhaps, if this router goes on sale, it could be the one. 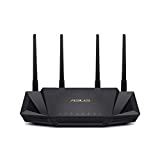 Seems very similar to the RT-AX88U. It supports half of the bandwidth, but that is still a sizable 3000Mbps. That should be more than capable for streaming a show and working, right? A little more than the TP-Link Archer AX50, but significantly less than the ASUS. Unfortunately, it appears to be sold out everywhere.

I’ve decided on the ASUS RT-AX88U. It is such a giant pain when the internet doesn’t work. I am going to be spending most of the week working from home and don’t want to deal with mesh networking. I think a decent router it is going to be worth the investment.