Lists
minecraft
loklav (Internet Guy) December 24, 2020, 6:32pm #1
You have undoubtedly heard of Minecraft. Since the game's initial release, in 2009, it has sold in excess of 180 million copies. It has received critical acclaim and has been described as one of the most influential video games ever produced.

Minecraft is a sandbox game that drops players in a procedurally generated world. It forces players to solve creative problems—sometimes with or against other players. The player must explore, gather resources, craft items and fight monsters. Different game modes and mods tweak the rules, but the need to creatively solve problems remain.

The friendly, block characters of Minecraft seemed out of place at it’s release. There was something endearing about it though. While other game studios were focused on making their game graphics as realistic as possible, Minecraft went the other direction.

That blocky look—now easily recognized as Minecraft—gave the game a certain charm. It set it apart and spawned a giant brand for merchandise. There are hundreds of Minecraft toys, board games, books, mini-figures. There’s even Minecraft party supplies.

Hopefully, this helps you narrow your choices—whether you’re looking for a few gift ideas or a detailed guide to the best Minecraft toys, you’ve found the right place. Below we’ve organized the toys by type. We’ve also provided links to the store so you know where you can buy them. 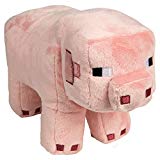 This sweet piggy is intended to be a soft, cuddly friend. You might have a high sword loot level, but that doesn’t mean he should be turned into porkchops.

The pig is a favorite mob (The term used for Minecraft’s mobile AI characters). The cute animals tend to appear in groups of 4 and can be heard oinking occasionally. They will stay away from cliffs and will begin hopping whenever they encounter an obstacle. If you have a carrot or beetroot, you’re certain to find a pig following closely behind.

Just incase you were wondering—this plush pig is not made of porkchops, its a polyester-fiber construction. 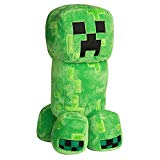 Ah, the humble creeper. The most loved and feared mob in the Minecraft universe. Don’t worry though, this cuddly creeper won’t explode. We promise!

Every great video game has some sort of mechanic that adds a bit of variance. It sneaks up out of nowhere and explodes—leaving you screaming and laughing at the same time. For Minecraft, that mechanic is the creeper.

Of all the Minecraft mobs, the creeper is the one that has emerged as the Minecraft icon. They are frequently the subject of fan art, internet memes, and—of course—merchandise.

They see me creepin’, they hatin’… 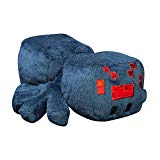 Cave spiders are almost the same as regular spiders—the poison spitting and such. However, they also fit into much smaller and darker places. Who said arthropods aren’t loveable? Just look at him.

It’s funny that you can make even the most aggressive creatures look cute by making something soft and rounding the corners a bit. I mean even besides the pincers and the million eyeballs, this spider is kind of cute, right? 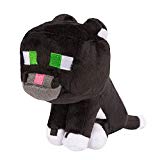 Of all types of cats in the Minecraft world, certainly the tuxedo cat is the cutest? Or is it the tabby cat? No, no it’s the one wearing a tuxedo.

Some fun facts about cat’s in Minecraft: they like fish and don’t take fall damage. Also, the big, scary, explody creepers tend to avoid them. Cats are weird in Minecraft just like they are in real life.

Looking for a cute stuffed toy, but don’t think your kids will like the pig plush? then perhaps this little tuxedo cat will do. 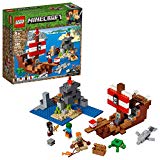 Personally, I’m a fan of LEGO sets that focus on a few mobile pieces over locations. They are easy to store and can be moved easily. That’s why this Minecraft pirate ship is an excellent option.

I also like the variety of characters and items included in this set—a turtle, dolphin, TNT, shovels, fishing rod and a treasure chest. What’s not to like? 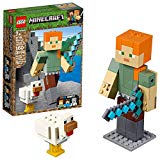 Features a large-scale Alex action figure along with a chicken. It’s a great desk toy for adults and perfect for kids to role play with.

This finished set contains to action figures one of alex with a diamond sword and the other of a chicken. Once again, I prefer these types of LEGOS because they emphasize a few larger creations that are more mobile.

Consider the other LEGO BigFig sets as well. Here’s Steve with a parrot and skeleton and magma cube building set. I chose to feature Alex mainly because I like the chicken. 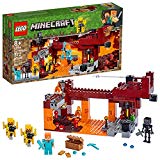 This cool Minecraft toy sets you in the Blaze Bridge located in the Fiery Nether. This kit contains orbiting blaze rods, falling rocks, several hostile mobs and a multi-level bridge.

If you do want something that has more emphasis on the location, consider LEGO Minecraft’s Blaze Bridge. The multi-level setting should be fun an easy to build. I like the mobs included here—an Alex mini figure, 2 blazes with blaze rods and a wither skeleton.

This tool transforms from a pickaxe to a sword in a few seconds. Made from durable hard plastic.

Say you need to mine some ore, but also defend yourself against angry mobs. What do you do? This is the perfect tool for the job. It’s hard to beat the utility of a pickaxe and the damage of a sword.

A word of caution—this toy is made out of hard plastic. If you think your kids are going to hit each other with this, maybe consider a foam pickaxe or sword. 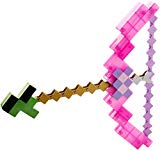 Bow features a translucent, metallic finish. The arrow can be pulled back and fired up to 20 feet.

Useful for attacking enemy mobs at range, this enchanted bow will keep you safe from a distance. Be sure with your shot though! Only one arrow is included. You’ll have to go collect it yourself.

Tridents are a useful weapon in Minecraft. Unlike the sword or bow, they can be used for both melee and ranged combat

While in the video game you can invest in Loyalty, an enchantment that makes your trident return to you, that option is not available in real life. If you throw this thing, you’re the one that’s going to go pick it up.

Minecraft Card and Board Games 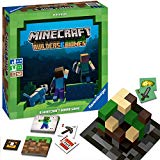 A collaboration between Revensburger and Mojang, this board game is perfect for Minecraft and board game fans. Each turn, players take two of five possible actions: explore the Overworld, mine resources, build structures, collect weapons, or fight hostile mobs.

This newly released game is recommended for kids age 10 and up. So it might not be the right Minecraft toy for your toddler. It’s meant for up to 4 players. Each game takes 30 to 60 minutes.

A Minecraft card game by Mattel

This is a quick card game based on Minecraft. Each turn players have the opportunity to mine, craft or reserve to win. Whoever reaches the point goal first wins the game.

This card game is intended for player 8 and up and takes about 20 minutes. The object is to get the most number of points, which changes based on the number of players.

Players will mine resource cards and then use those resources to craft an item. Each item has a certain power that adds some variability to the game.

Alex, Skeleton and Zombie At Door

This set contains a zombie at the door and a very Halloweeny skeleton with pumpkin armor. It also contains Alex with enchanted armor to fight back all the hostile mobs.

If you like the idea of mini figures, but don’t like the characters in this set, consider one with slime cubes or a teleporting Enderman. 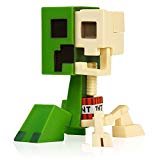 Anatomy of a Creeper

Creeper Explodus is an interesting mob. It is an all-terrain ticking time bomb waiting to sneak up on you. This kit shows all the important parts of a creeper including skeleton, brain and—of course—highly explosive TNT.

I think this would make a really cool gift for big Minecraft fans. It stands about 8-inches tall and shows a bisection of a creeper. This is definitely more for display than a play toy though.

Ah, the Nether-dwelling Ghast—now in drone form! This quadcopter lets you fly the Ghast via remote control.

One of the more creative Minecraft toys I’ve seen. Drones are difficult to build and this one isn’t going to get and points for aerodynamics. However, it’s a perfectly fine drone to fly indoors.

This drone does contain blade guards, so it’s got a much smaller chance of doing damage when bumping into things. Whether you want a Minecraft drone bumping into your walls or ceiling—that’s another story. 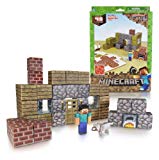 There’s a few of these Minecraft paper sets that I think are pretty cool. They come as booklets and you fold the paper together into blocks. If you’re looking for other sets that have less materials and more characters, consider this one with paper animals or this set with paper creepers.

If you’re a parent and have a child that loves Minecraft, consider this excellent set of prints from Diana Alcala. Might be a great option for your kid’s room. I’ve linked to the set, but the seller also has individual prints are also available. 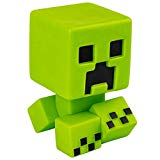 This iconic creeper bobblehead is approximately 5 inches tall and glows in the dark.

By this point in this guide, you’ve probably seen all the creeper toys you’ll ever need. However, if none of them seemed quite right, there’s always this bobblehead creeper. 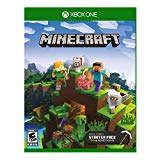 The coolest Minecraft toy of all

Explore infinite worlds and build everything from the simplest of homes to the grandest of castles. Create, explore and survive alone or play with friends.

I originally left this game off the list. That was a mistake. As @Sam pointed out you can’t compile a list of the best Minecraft toys and leave off the toy that inspired all of them. So here it is!

Good post! I didn’t realize you were such a toy expert.

Sarcasm aside, I didn’t realize how many different types of Minecraft toys there are—legos, stuffed animals, drones—there really is a little of everything.

With all these toys you didn’t mention te most important one though? Where’s the game?

Fair enough. I had considered putting the game in here, but figured those who were interested in this topic already had the game.

I think you’re right though. I’m putting this list together. Might as well add the game that all these toys are based on.