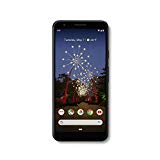 Enter deal info, such as coupons/rebates. Include specific steps if applicable.

Amazon has the Unlocked Google Pixel 3a on sale right now According to both Honey this is an all-time low price.

This deal is notable because most phone deals are dependent on signing a multi-year deal with a carrier. This is for the unlocked phone.

Last year we saw several big Black Friday deals for Pixel phone from the Google store. However, if you need a phone immediately, this is a pretty good choice.