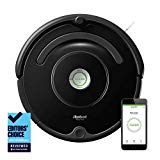 iRobot's Roomba 675 has almost identical specs to the 614, but includes Wi-Fi connectivity, that allows control via the Roomba smartphone app.
View on Amazon

Enter deal info, such as coupons/rebates. Include specific steps if applicable.

Available on Amazon. According to CamelCamelCamel, this appears to be an all-time low for this Roomba model.

This price puts it at almost the same price as the almost-identical Roomba 614.

In the past I’ve written about why I dislike many IoT gadgets including robot vacuums. If you’re like me and want to avoid useless IoT apps and gadgets—there is good news. The Roomba 675 should be able to function without the app.

Bumping. The Roomba 675 is back on sale.