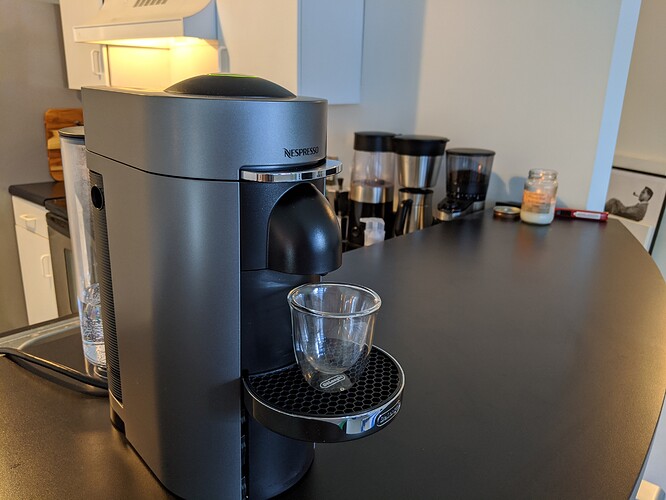 VertuoPlus-Deluxe-Espresso-Ready4032×3024 1.68 MB
Nespresso's VertuoPlus Deluxe is one of the premium models in the Vertuo Line. Vertuo machines are perfect for people that want espresso and coffee, but have limited space. However, I think it is a step back in practicality. If you're looking for a Vertuo Line machine, I think most people are better off with the Nespresso Evoluo. 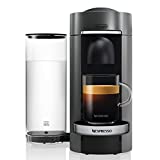 A unique machine with some oddities

Nespresso machines are a great way to get a decent espresso fast and without a mess. The VertuoPlus Deluxe is a decent machine with a few quirks.
Buy from Amazon Nespresso Store

Why a Nespresso machine? We’ve been trying to make more space on our kitchen counter. So got rid of my coffee grinder and maker.

I spent two weeks reviewing every Nespresso review I could find—YouTube, reddit, Nespresso forums. I also asked for input from other Product Dork members . Then I went out and purchased what I thought were the four best Nespresso machines on the market: the Essenza Mini, Citiz, Evoluo and Verturo Plus Deluxe. I tested those four machines for six weeks. 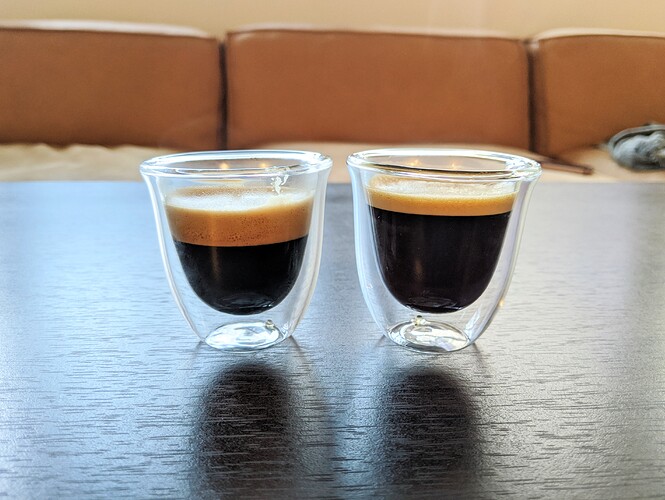 We tested VertuoPlus Deluxe for brew temperature, speed and capacity. The results for temperature and speed are very similar to the Evoluo and—I expect—all Vertuo Line Nespresso machines.

While we ran these same tests for the Citiz and Essenza Mini, the Vertuo Line makes coffee as well as espresso drinks. So for the temperature and speed tests we distinguish coffee from Espresso.

Someone is going to ask why I didn’t include Grand Lungo, Double Espresso or Alto sizes in this data set. The reason is that I wasn’t a fan of the flavors and that beyond the sample packs, we didn’t order any more in those sizes.

We measured temperature by sticking a Javlin thermometer in the cup immediately after the cup was done brewing. The temperature range was about 13 degrees for both Coffee and Espresso drinks.

The temperature of coffee from Vertuo machines has been criticized elsewhere. People think the coffee is not hot enough. Personally, I think 150F (on the cool-end) is plenty hot, but if you’re adding a lot of milk or creamer, it probably won’t be as warm as a cup from your drip machine.

Nespresso machines are fast. Times are fairly consistent between brews. There are two factors in how long it takes to make a drink. The first is the type of pod you’re using—the larger the drink, the longer it will take to brew. The other is whether the machine needs to heat up at all.

It takes about 20 to 30 seconds longer to make a coffee than an espresso. 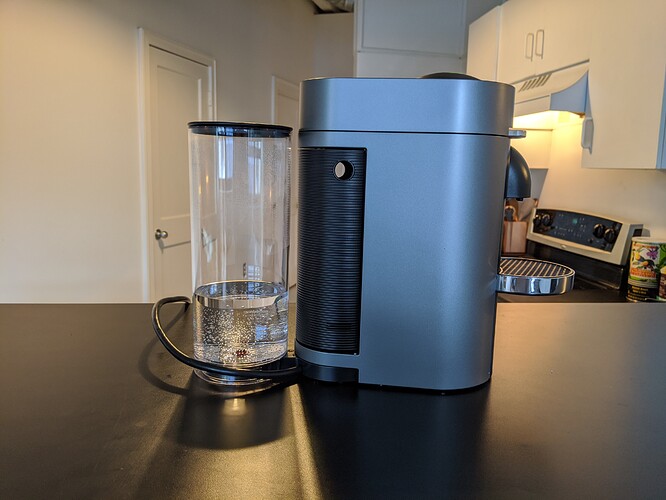 The VertuoPlus Deluxe has a giant 57.5oz water tank and a 10 capsule bin. You will likely empty the pod bin several times before needing to refill the water tank. There are some oddities related to the tank, but I’ll save those more for my commentary below.

The VertuoPlus Deluxe is a decent machine, but I don’t think there’s a good reason to buy it over the Nespresso Evoluo. Unless you really like the way it looks, there are few advantages over that machine. 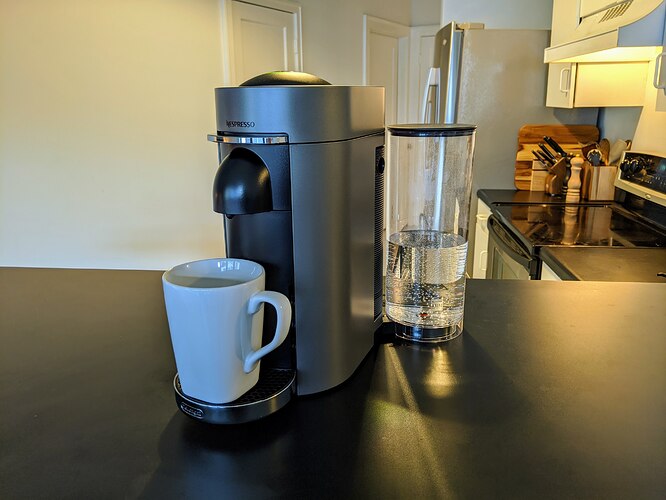 The VertuoPlus Deluxe that I ordered was the De’Longhi model in Titan. Breville also has a version with a rounded top, but that machine looks even stranger.

I’m not a fan of glossy plastics. From all the reviews and unboxing videos I watched, Titan appeared to be the best choice. After unboxing it, I’ll stick by that decision. The material quality on the machine is excellent. It has an-almost metal feel, even though it’s mostly plastic.

The build quality is excellent. Every hinge and joint feel tight. No wobbles found. The Deluxe version of this machine also has a chrome drip tray which is a nice touch. 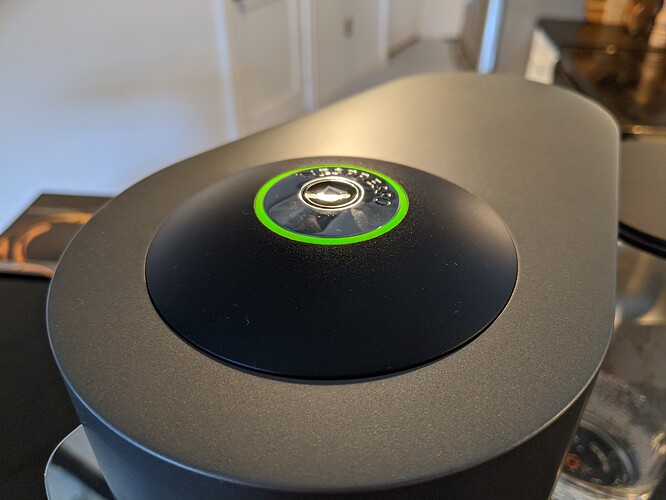 The ring light on the top of the machine provides feedback on whether the machine is warming up, ready or needs to be cleaned. It’s a nice touch.

It is subtle, but little details like that add up. 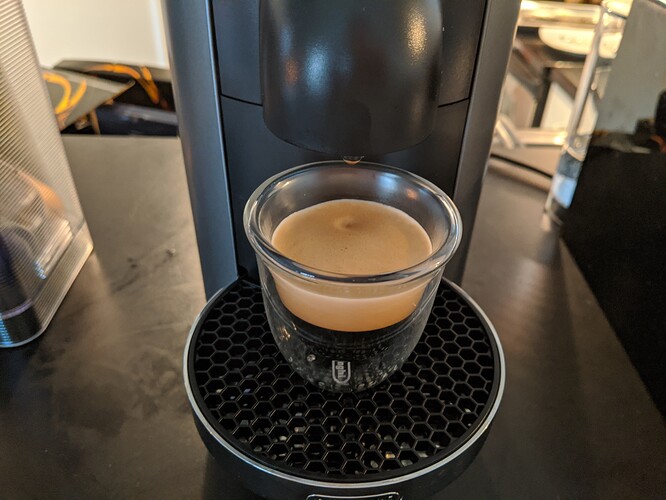 With the Vertuo machines you can make a cup of coffee or an espresso. Having a single machine does save a ton of space. My girlfriend mostly drinks the coffee and I drink the espresso. We don’t have a ton of counterspace for machines, so the Vertuo is perfect.

With that said, you’ll get that advantage with any Vertuo Line machine.

The biggest issues I have with the Vertuo Plus Deluxe revolve around it’s strange design. However, there are a couple other items woth mentioning.

Design is mostly form over function

The machine has an incredibly odd footprint. It has this oblong oval shape, which is fine. However, there is a pad that comes out the back for the water tank that moves around—presumably to make it easier to detach?

It’s odd because it makes the machine take up a ton of counter space. 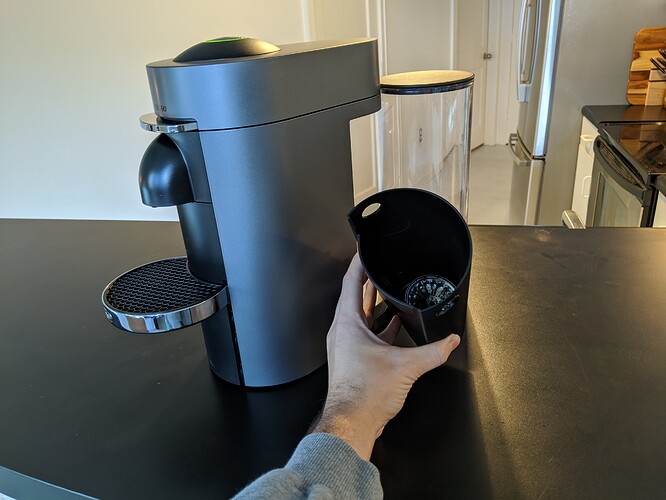 The previous generation of Vertuo machines had a large side-mounted pod bin. The Vertuo Plus Deluxe has a rear bin.

I prefer the side or front bins, because you don’t have to move the machine to get to the bin. That’s made more difficult by the odd water tank design. 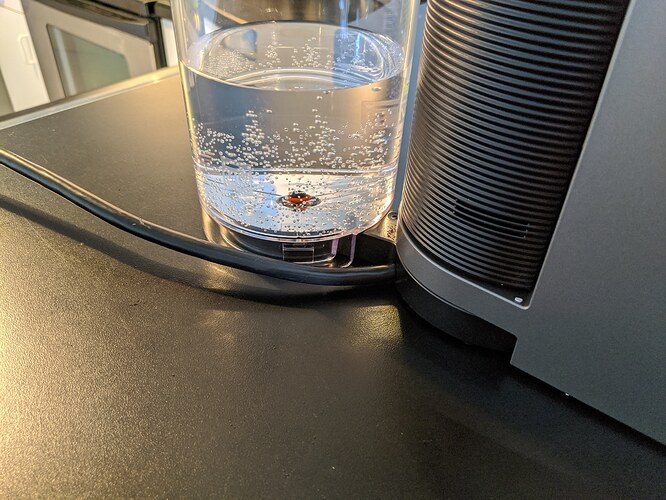 The water tank feels like something that was grossly over-designed.

It has an articulating arm that rotates around the rear of the machine. I’m sure the intention was to make it easier to get to the large rear tank, but it is difficult to move without picking up the machine, which is awkward because the tank is so big. The arm also doesn’t move far enough for the feature to be useful. 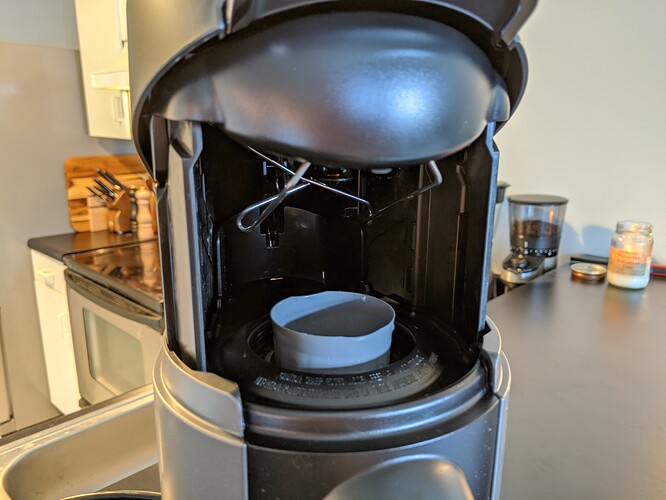 The Vertuo Plus Deluxe has a feature that automatically opens and closes the pod chamber. The previous generation of machines had to be manually closed and locked.

Most will probably disagree with me and love this feature, but it wasn’t for me. It felt like the machine was awkwardly slow. I prefer the manual design.

The Vertuo Line can make coffee or espresso (or lungos, altos and double espressos). However, the barcode that the machine reads to decide how to treat the capsule is proprietary. That means you’re looking at dozens of coffee options as opposed to thousands for the original espresso pods. No third-parties can produce them.

This works for us. The machine is quick. Plus, I expect most people who own it to mostly stick to a handful of flavors they like. That’s what I do. If I want want to make a good cup, I’ll use my french press or Chemex.

You like the particular aesthetic of the VertuoPlus Deluxe and have the counterspace to support it’s quirks. This is really the only reason to buy this machine over the Evoluo. If you just want an espresso machine, consider reading our Nespresso Citiz review.

A unique machine with some oddities

Nespresso machines are a great way to get a decent espresso fast and without a mess. The VertuoPlus Deluxe is a decent machine with a few quirks.
Buy from Amazon Nespresso Store