We did one of these threads for Google’s Pixel 3 Event and it was well-received. I figured it would also make sense to do it for Apple’s October Event. If you’d like to watch the presentation, it’s available on Apple’s website.

Apple updated the Macbook Air, Mac Mini and iPad Pro at this event. Here are my hot takes on all three. 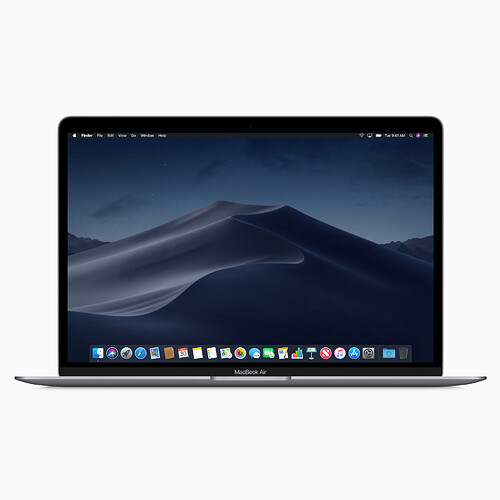 Macbook Air: One of the best computers of all-time gets an update

The Macbook Air is up there with the 2015 Macbook Pro as some of the best laptops ever made. It was the first Apple laptop to implement SSD and felt blazing fast because of it.

The model has aged incredibly well. As a matter of fact, this post is being written on my Mid-2012 Macbook Air. The keyboard is great and for my day-to-day tasks it still works well. However, it can only run a limited number of games. Also, retina screens have ruined me so I can see every pixel.

What’s great is Apple has largely kept what is great about the computer intact. It has the same wedge design that makes it easy to fit in a backpack. It has an updated processor, new retina display, more battery life and is 17 percent lighter than the previous model.

The new Macbook Air uses Apple’s 2018 butterfly keyboard, which has a bit more travel (or so they say) than the 2017 model and is a lot more reliable. I’m indifferent, but know some will be extra critical. Also, there is no TouchBar model—thank goodness!

What about ports? The MagSafe, SD card, Thunderbolt 2 port and traditional USB ports are gone. The 2018 model contains 2 USB-C / Thunderbolt 3 ports and a headphone jack. This is the same configuration as the low-end Macbook Pros. While I think the loss of ports in a professional lineup is a shame, it is a fair adjustment for the mid-range models.

Despite how good I think this update is, I am confused about Apple’s positioning here. I fully expected the Macbook lineup to simply replace the Air. There seems little reason to purchase a Macbook. Sure the screen is about an inch smaller, but it cost more and is slower than the new air.

There’s also a ton of similarities when comparing the new Air to the low-end Macbook Pro. Perhaps you’re trading a bit of graphics power and screen brightness for less weight and more battery power. I’d be curious to see a comparison.

OK, final thought—I can see this Macbook Air aging just as well or better than the previous generation Macbook Air. As dissapointed as I was with the updated Macbook Pro, Apple did a solid job with the new Air!

Apple updated it’s Mac Mini for the first time since 2014. The new computer comes in Space Gray and has 4-and 6-core configurations. It can be customized to have up to 64GB RAM and up to 2TB storage. The new Mac Mini also includes Apple’s T2 chip for additional security.

What’s not to like here? The Mac Mini is a computer many love. There is no Mini trashcan or radical redesign. Apple took what was working and updated the specs.

Also, I love this product shot of the Mini internals with the T2 chip. 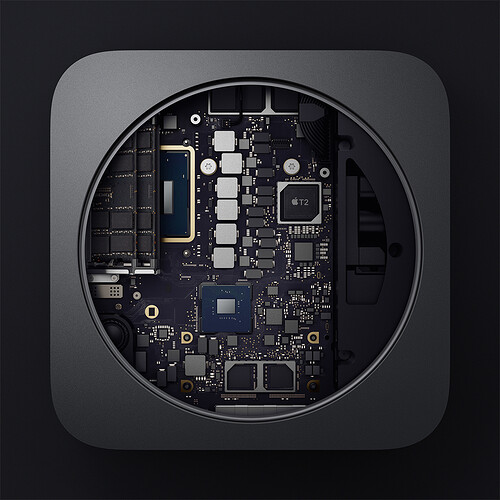 Perhaps the only deterrent is that the new Mini did receive a price bump. It now starts at $799 instead of $499. Even with that, it seems to be well-received. It’s a versatile, affordable Mac computer. 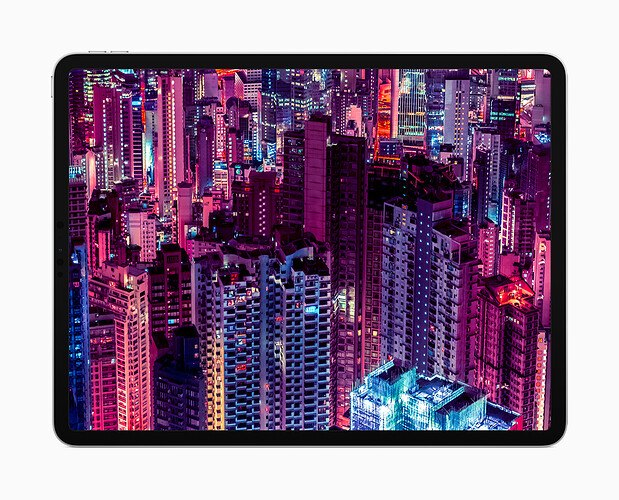 Like many, my main interest in this event was around the new iPad Pro. Many expected them to have reduced bezels and do away with the home button and Touch ID in favor of a larger screen and Face ID. They did just that.

I’m not sure how I feel about Face ID. The conspiracy theorist in me says it is feeding some sort of government database so they can identify people in airports. I’m sure most will love the feature though.

The iPad pro gets a new processor—the A12X Bionic and Next-Generation Neural Engine. One thing that stuck out to me was the claim that this chip is more powerful than 90 percent of laptops sold last year.

That’s a really incredible claim. If true, it:

But does a tablet really need that kind of power? Maybe for AutoDESK and AutoCAD? It certainly doesn’t seem that mobile games require that kind of power. The nature of the App Store itself dissuades a lot of AAA titles from appearing on iOS.

I was hoping that the new iPad Pro would be smaller and lighter and could replace my Mini. Unfortunately not. It is slightly taller and narrower than the previous one and weighs 1.03 lbs. It’s almost the exact same size and weight as the 9.7-inch iPad.

While it seems like a device with amazing potential. I don’t think I’ll be purchasing a new iPad Pro.

Unrelated to the product itself, but I strongly dislike how scrolling vertically on the iPad Pro product page forces the user to scroll horizontally.

Despite how good I think this update is, I am confused about Apple’s positioning here. I fully expected the Macbook lineup to simply replace the Air. There seems little reason to purchase a Macbook. Sure the screen is about an inch smaller, but it cost more and is slower than the new air.

There’s also a ton of similarities when comparing the new Air to the low-end Macbook Pro. Perhaps you’re trading a bit of graphics power and screen brightness for less weight and more battery power. I’d be curious to see a comparison.

Apple is a multi-billion dollar company—one of the worlds largest. You don’t get that big without a strong understanding of pricing. It’s easy to pass the confusion off as silly and an oversight on Apple’s part, but it is likely part of a very deliberate pricing strategy.

Confusing pricing structures often benefit companies, not consumers. I’d encourage you to give this 9to5Mac article a read. 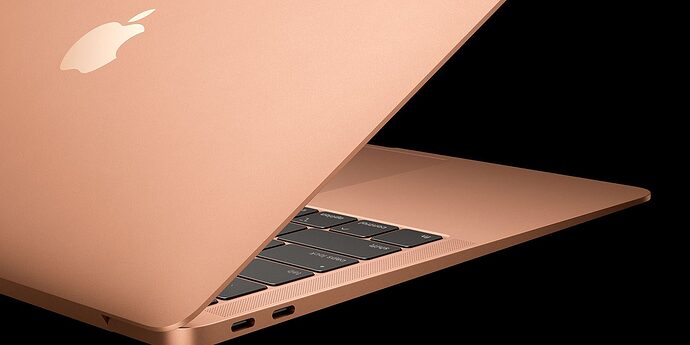 The iPhone X significantly boosted the average selling price (ASP) of the iPhone range. The 2018 MacBook Air will do the same for Macs ...

The article talks a good bit about the iPhone X pricing, but this section, in particular, addresses your comments about the Macbook vs Macbook Air pricing.

Apple actually kicked-off its strategy to boost the ASP of the MacBook line-up back in 2015 with the 12-inch MacBook.

By introducing the 12-inch MacBook at a significantly higher price, but keeping a $999 MacBook Air in the line-up, Apple was able to take advantage of that split demographic. Those buying on price would continue to buy the MacBook Air. But those who wanted the smallest and lightest Mac would now be paying $1299.

You see Apple is trying to maximize revenue by forcing customers to make a choice. The same thing is happening with the Macbook Pro lineup right now.

This is a good post and your other comments are spot on! Just consider that most consumers do not evaluate products as thoroughly as you or the other members of this forum.

Well, if the rumor in the iPad Mini thread is true, it may not be dead.

So it turns out the iPad Mini might not be dead after all. There are rumors… https://www.macrumors.com/2018/10/23/kuo-october-event-ipad-mini-refresh/ Kuo says that Apple will launch a new version of the iPad mini, which has not seen an update in several years. Kuo says the device will feature an upgraded processor and a lower-cost panel. Kuo does not know, however, if Apple will announce it during the media event or launch it sometime later in the year/early next year, but if an updated mod…

Interesting that it came to surface right before the October event. Does Apple have any control over those rumors? If so, wonder if that is because Apple is afraid that those wanting a smaller iPad will flee to Amazon’s Fire tablet? Although, that may not be true. Everyone else is far behind iPad in the tablet market.

Either way I hope this is true. I’d take the Mini 4 with a processor upgrade.

A fascinating and fair point that I had not considered. The article you shared does a good job explaining iPhone X pricing.

It makes me think of a few other scenarios where businesses have odd pricing options.

Where else are these types of pricing options?

I am super-excited about the new MacBook Air! I have a Mid-2012 Air that has served me pretty well through college and beyond. They are expensive, but to have a computer that reliable is worth it!

Welp, it sure looks like Apple knows pricing. They exceeded earnings expectations. Profits are up 32 percent. I saw this summary in the Morning Brew email this morning.

After hiking prices on new models, Apple smashed through earnings expectations on the top and bottom lines, tallying a fourth consecutive quarter of record revenue and profit.

…if only that were the whole story. Shares fell nearly 5% after hours when its important holiday quarter forecast (between $89 billion and $93 billion in revenue) failed to impress.

The biggest takeaway: Average selling price (ASP) for iPhones was a massive $793…up 28% from last year and well above projections.

Apple’s Services unit —aka the shining star of Apple’s effort to diversify profits away from iPhones—reached a record high of ~$10 billion in revenue last quarter.

As a side note, I love the newsletter. If you’re interested in markets or investing, I would highly recommend.

I’m skeptical of the IPad Pro taking over desktop computing anytime soon. I do a ton of writing and purchased the 10.5 inch iPad Pro along with the keyboard attachment. My intention was to move away from my old 11-inch MacBook Air to the iPad.

I had high hopes with the introduction of folders on iOS and other improvements geared towards desktop users. Unfortunately, that really hasn’t happened. Maybe I’m getting old, but it seems too awkward to go from keyboard to poking around at little squares on the screen.

At a certain point it becomes tiresome. I’m sure iOS will improve, but it just doesn’t seem there to replace my desktop needs.

Yeah, I don’t think the iPad is a desktop replacement—well for most professionals. But most people are not professionals. Computing is Instagram, Twitter, reddit and internet browsing. Maybe using FaceTime? My old iPad Mini 2 is still good for all of those things.

Benedict Evans had an interesting comment the earlier today about the iPad Pro and professionals.

It can’t run Illustrator. If you need that, it’s not for you. But Adobe CS is on less that 1% of the PCs on Earth. FCP is on 0.1%. Perhaps 2% are used for writing code. And some of the other 98% consider themselves ‘professionals’ as well...

I know illustrator takes a good bit more horsepower than writing programs, but I’d be curious to know the percentage of people that use writing software on their iPads. I’d bet it is almost as small.

My guess is Apple is still trying to figure out the interactions to make it work for professionals. It strongly believes that can be done with software at some point in the future. In the mean time it can throw the best hardware it can into the iPad Pro so that when Apple figures it out, those old iPad Pros will be up to speed.