Catan Portable Edition Review: A Joy for Any Catan Fan

SalesLoft’s design team recently had an off-site where everyone brought board games. One of my co-workers brought Catan. As many of you regulars know, I’m a big fan of Catan.

I had assumed that this was going to be a full-sized board. However, I was surprised to see him pull out this cute, little mini-Catan. This is the Catan Portable Edition. And as you can see I’ve won this game spreading out across the top of the board, while everyone else fought for longest road along the bottom.

The board, pieces and cards are all tiny. The cards are a little bigger that most people’s thumbs look at them next to the drink glass for size comparison. The pieces are all pegs that fit into holes in the board—kind of like Battleship. It makes it so that the tiny roads, settlements and cities don’t get lost.

The co-worker said that the robber had apparently gone missing long ago. A red checker from another game was used as a stand-in.

Two minor issues with this version of Catan. First, the settlements, roads and cities are all too similar in shape. It’s difficult to tell what you’re pulling out of the box. The other thing is that the numbers can’t be rearranged. Ports and hex tiles, with the exception of the desert, can all be rearranged.

All-in-all, it’s true to the original game and I’d recommend it to anyone that loves playing Settlers of Catan. 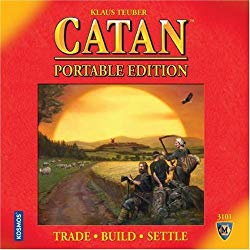 The best travel-version of the original game

A tiny version of everyone's favorite board game. The Portable Edition, keeps nearly all the great things about the original game and packs it into a small box.
View on Amazon

The Portable Edition is no longer in production and can be difficult to find. If the you can’t find it, there’s also the Catan Traveler Edition.

What is Catan Traveler Edition? What’s different about it?

This version of the game is even more compact than the Portable Edition. There are drawers for each player below the board. It’s a clever way to save space and allow people to play in even more space-constrained areas.

Catan Traveler is less flexible than the Portable Edition. In the portable edition you can replace almost all the ports and hex tiles. Here the entire board is three pieces. If you intend to play on this board a lot, this may reduce replayability. For most people, I don’t think it will be a big deal.

If you want to play Catan on the go, this is also a solid option. 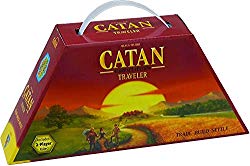 This version is both more compact and less flexible than the portable version. Hex tiles are less adjustable, but all the cards and peices fold up into the board.
View on Catan.com View on Amazon
1 Like
Product Dork's Top Purchases October 2019
Black Friday 2020