Reviews
catan, board-games
Sam (Sam Solomon) December 8, 2020, 1:39pm #1
This Catan Expansion Buying Guide is based on the fantastic comment by IanReese in the Which Settlers of Catan expansions can be played with each other? thread. I've rewritten a bit of it. If there's anything I should change, please leave a comment.

One important thing to note is the difference between expansion and extensions for Catan. This Generally Expansions add new game elements, while extensions add more pieces.

How all these work together is a bit complicated. This guide focuses on Expansions. However, if you just want to figure out what packs you’ll need, the thread below has a cool chart to help you decide what expansions and extensions to buy.

Which Settlers of Catan expansions can be played with each other? Questions

Catan is a great game. As for combining expansions you could probably combine the first three. Explorers & Pirates ships concept is at odds with shipping lanes in Seafarers. I don’t think it would make for a fun game though. Combining Seafarers and Cities & Knights is pretty common. However, as you mention, there are a good number of additional rules to follow. The boxes you need are fairly straight forward if you only want to play the expansion with 3 or 4 people. 3-4 Player Game Require…

Often the most recommended first expansion. It adds the fewest new rules and they mostly follow the same patterns as the original game.

I’d say there’s also a bit more structure in setup. With the original game you can essentially shuffle all the hex tiles and place them down. With Seafarers it’s harder to do that and get an interesting game. There are a handful of setups that are recommended.

All-in all, this is probably the best Catan expansion for most people. It’s easy to learn and adds a good bit more replayability. 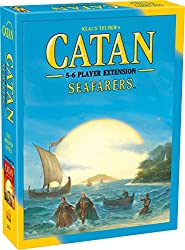 The best first expansion for most players

Cities & Knights Expansion: For Those Who Want More Depth

The Cities & Knights adds a significant amount of complexity to the base game including armies, technologies, commodities. If you wish Catan had a bit more depth, Cities & Knights is the expansion for you.

Note: the extra rules will likely make turns take much longer. It can get boring if you’re playing with friends and it takes 10 minutes to complete a turn. 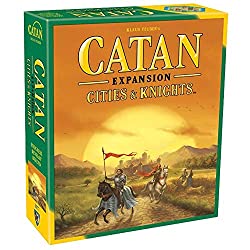 Cities & Knights makes Catan feel very similar to the Civilization game series. It adds commodity and progress cards to the game, barbarians, knight pieces and upgradable cities. This is the expansion for those who love Catan, but wish it had a bit more depth.
View on Catan.com View on Amazon

This expansion along with Explorers & Pirates are a good bit different than the original two expansions. These offer a collection of scenarios that can be altered or combined to create a ton of different ways to play.

There are some smaller variants such as Harbormaster, Catan Event Cards and 2-player Catan. These variants can be added to just about any Catan expansion.

Traders & Barbarians adds 5 scenarios and a handful of smaller variants, such as Harbormaster, to the original game.
View on Catan.com View on Amazon 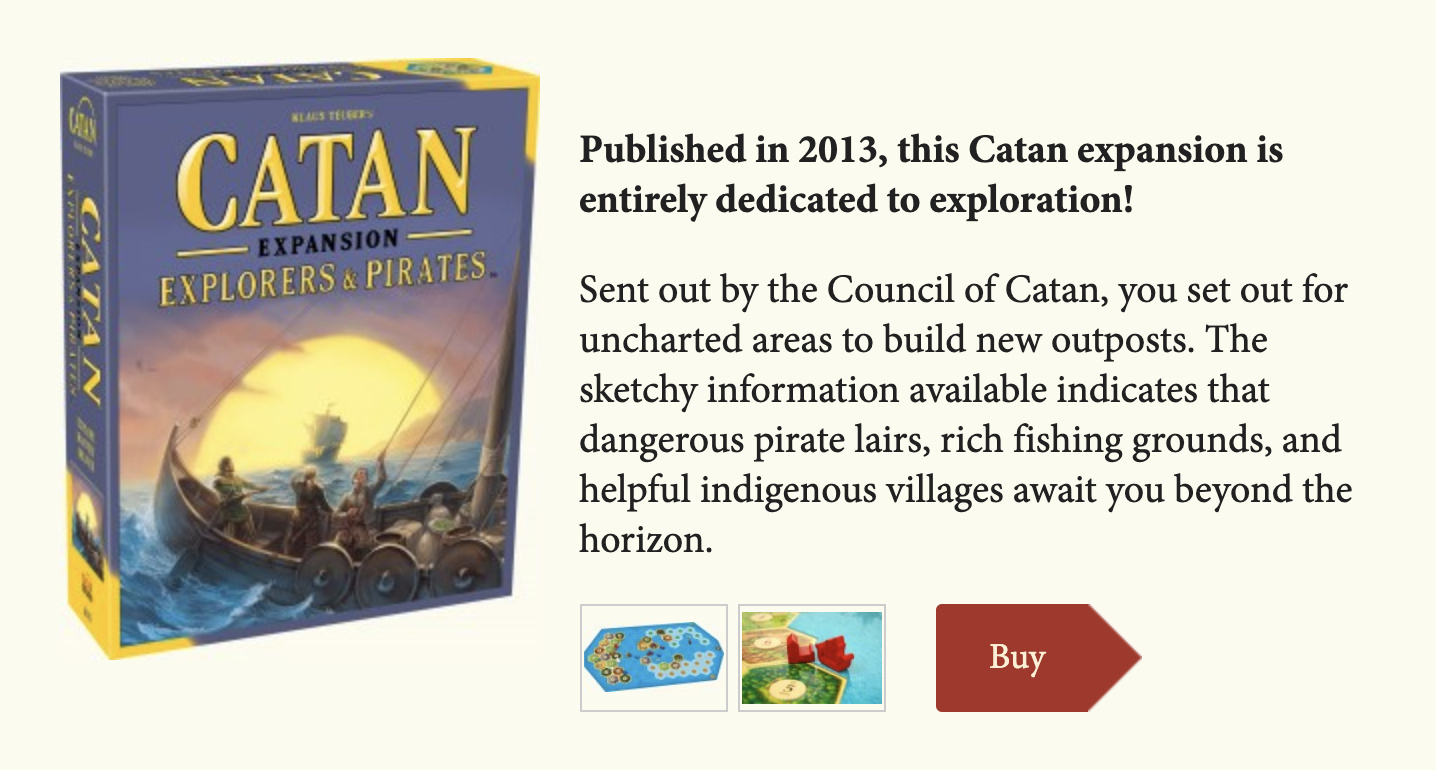 Explorers & Pirates Expansion: A Collection of Scenarios that Build on Each Other

Explorers & Pirates is the newest of the Catan expansions. Like Traders & Barbarians this expansion is a collection of smaller scenarios that can be mixed and matched. These focus on new game mechanics that are built around exploring.

Here are the scenarios included in Explorers and Pirates:

Each expansion contains a scenario that builds on the next one. It gives you the opportunity to learn how to play the full expansion while playing the game. By the time you get to the Explorers & Pirates scenario, you have a good idea of what strategies to use.

Of all the expansions I’d say Explorers & Pirates offers the biggest change in gameplay from the original Catan. 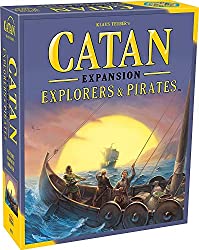 A collection of scenarios that build on each other

Published in 2013, Explorers & Pirates is the newest Catan expansion. It includes a collection of scenarios with mechanics that build on one another. An excellent expansion for those that enjoyed Traders & Barbarians.
View on Catan.com View on Amazon

One suggestion I would make before purchasing any of these expansions—download Catan Universe and purchase the expansion you’re considering. Universe is a digital version of the game and much cheaper than the board game. You can purchase all the expansions in Catan Universe for about $20 and play them across any number of devices.

That way you can get a better feel for gameplay before spending $50 or more on a single expansion.

If anyone reading this guide has any questions, I’d be happy to answer them!

My boyfriend and I have a few friends we play with regularly. We own both seafarers and cities and knights. Those that know that game seafarers is an absolute must. It adds some additional variation to the game without making it more complicated. That is the version we play the most.

As for cities and knights, I enjoy the mechanics, but turns take absolutely forever. There is so much more that needs to be considered every turn it starts to get pretty boring. If anyone has some suggestions for speeding up or improving gameplay, I’d love to hear it!

Thanks for the response Katie! That mirrors my own experience with the game.